Fellow white people, I think you should see these Instagram posts about racism 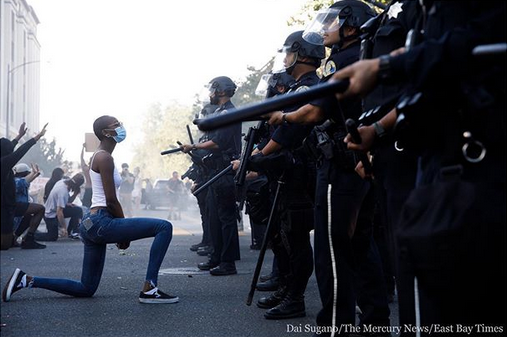 George Floyd, Breonna Taylor, and so many other Black people have been killed by police.

And I haven’t been sure what to say lately. Or if I should say anything at all honestly.

So I’m not going to say anything else. Instead, I want to hand my mic over to BIPOC folks (Black Indigenous People Of Color).

Below are the best Instagram posts I’ve seen about racism that have helped me. And I think every white person should see these.

I've broken them up into four categories:

Inspirational Moments Among The Chaos

#AntiRacist Zones by Dr. Andrew M. Ibrahim 〰️ Artwork by @saritawalsh. It doesn’t matter where you start (the fear zone or the learning zone) the goal is to keep GROWING 💭🕊 anti racist work is deeply humbling, but the reward is exponential 💚

Hi everyone 👋🏽 it’s been a really rough week for all of us. I know that non-Black folks are doing everything they can to learn + unlearn their way towards being better allies to us. This is evident based on the 8,000 wonderful folks that started following me recently (ummm, wow! Thank you 🙏🏽). I’ve been having so many impactful conversations I have been having in my DM’s. Despite all of the resources and information that’s coming your way I know that this shit is really tough to talk about. I’ve been having a lot of conversations with my closest non-Black friends and a lot of them have confided in me to say they simply don’t know what to say to their Black friends right now. Listen, I get it. I’m right there with you. Most of my conversations with my Black friends start and end with tears. Talking about race is hard for us too. Mainly because it can’t trigger past lived experiences and traumas that cause us to feel sadness, regret and in most cases shame. All of this is causing us to open up old wounds that we’ve suppressed for years just to cope. So, to all of my new non-Black friends and followers and specifically the white folks looking to do better if you haven’t said anything to your Black friends yet, please do so. I know it’s hard so I’ve shared some things that people have said to me that made my heart smile and my soul feel good.

Re-post from @drorbeaustin , and the words she shared in her recent interview with the @huffpost . We must stop laboring the Black people in our lives to support our processing of this moment. We are in deep reflection about how to invite our communities to do so. How can we hold space for each other as non-Black communities to process, in order to stand in solidarity and take action? #stoplaboringblackpeople #solidarity #action #blm #BlkLivesMatter #allyship #allies #accomplice #co-conspirator

In an essay for the New York Times, acclaimed professor, award-winning author, and director of the Antiracist Research & Policy Center, @ibramxk dove into the topic of how to combat racism: ⠀⠀⠀⠀⠀⠀⠀⠀⠀ “No one becomes “not racist,” despite a tendency by Americans to identify themselves that way. We can only strive to be “anti-racist” on a daily basis, to continually rededicate ourselves to the lifelong task of overcoming our country’s racist heritage. We learn early the racist notion that white people have more because they are more; that people of color have less because they are less. I had internalized this worldview by my high school graduation, seeing myself and my race as less than other people and blaming other blacks for racial inequities. To build a nation of equal opportunity for everyone, we need to dismantle this spurious legacy of our common upbringing.” ⠀⠀⠀⠀⠀⠀⠀⠀⠀ In order to do this, we have to educate ourselves. We can learn about covert white supremacy, follow organizations leading the way for racial equity and justice, watch films, listen to podcasts, and read books. This doesn’t need to be seen as a chore, but can instead be seen as an opportunity — an opportunity to better understand ourselves, love our neighbors, and become the change we wish to see. #repost: @goodgoodgoodco

Thank you for these action items @shiftingtheculture. We would also add giving resources. Right now, there is an Official George Floyd Memorial Fund and several organizations on the ground in Minneapolis who need support, including the Minnesota Freedom Fund, Reclaim the Block, and Black Visions Collective. Also, a note on “calling in”: sometimes there is also a necessity to “call out” so please allow space for both. The push to only “call in” can be a way of tone policing, confining, and dictating the ways in which marginalized groups and individuals are able to show up and respond to their own oppression. The feelings and comfort of the offender are centered and prioritized, while the person, or community harmed is further marginalized by having to respond within the confines of the perpetrator’s comfort and terms—not their own. This also never occurs in a vacuum and usually after many unsuccessful attempts to “call in”. #BlackLivesMatter #GeorgeFloyd

Spot on! Thank you @givensharp!

Repost of @wyattcenac who has been saying smart and profound things since forever.

@mrahmednurali [image: tweet by @mrahmednurali that reads: “It's a privilege to learn about racism instead of experiencing it your whole life.” in plain black text on a white background]

not an elegy for Mike Brown // a poem by @danez_smif

Wise words from a very wise man. We must all fight for justice and peace.

This was written by a white woman. And yes, amplify Black voices, and in that, amplify love. Amplify peace. Amplify empathy. And most importantly, amplify GRACE. @teamev’s poem is a beautiful example. ⠀⠀⠀⠀⠀⠀⠀⠀⠀ Black people in this country have never had the grace to be full humans. We started off as property, then became 3/5ths of a human, and are still treated as disposable. Living with heartbreak over blackness is a part of living in this country as a Black person. It shows up in big ways like murder. It shows up in little ways like the prevalence of liquor stores in Black neighborhoods, high student to teacher ratios in schools, food deserts, mass incarceration, targeted advertising etc. but none is so visceral for me today as the lack of grace and compassion given to those who are grieving. As though we are still less than. ⠀⠀⠀⠀⠀⠀⠀⠀⠀ A lot of us are grieving loss upon loss upon loss. This pain is in our dna. I tried to write out a brief history of the abuses Black people have suffered but sobbed so hard I had to stop typing. This pain is both ancestral and current. If you haven't experienced it, dont understand it, or cannot find compassion for it, at the very least please do not invalidate the other’s experience of it. Grace please. Grace. ⠀⠀⠀⠀⠀⠀⠀⠀⠀ I pray that you never know a pain which stems from those you love being killed based because of an unjustifiable fear from those who kill them. I pray you never know the pain of consistently trying to find your way in a system not built for you to thrive. I hope you dont ever know the pain of your existence itself being a threat. And I hope you find a way to give grace to those who do.

@trondynewman trondynewman [image: tweet by @trondynewman that reads “For anyone worried about talking to their white children right now—worried that their kid is too young for these conversations—I was 5 or 6 when my Dad told me “no matter what you do, some people will always hate you.” Black children don’t get to not understand racism.”] #BlackLivesMatter #Parenting

I received an email this week from a white woman who wants to know how she can support racial justice but without risk. And I’m sorry to share, it’s not possible. To be antiracist is to be active. It’s to resist the status quo. It’s raising your voice and making noise. It’s protesting and declaring things must change. It’s challenging supervisors and boards and executive teams and donors. Choosing antiracism is often choosing to be a nuisance. ** Please note: I do not share this to judge her. I’m sharing because there are a lot of people who want to “do the right thing”, but. But not risk your job or your fellowship or your funding or your friends but this work is inherently risky. You must accept that or else acknowledge you are not yet antiracist.

We implore white parents to DO YOUR WORK. Don’t miss our latest episode featuring @julieleak!

I wrote briefly about the re-opening of America. Link in bio.

We Need To Keep Fighting Racism

THIS is where we're at. We are trying to change a system that wasn't designed to work for us. Ever! The hill that we have to climb is steep and rife with naysayers, haters and the status quo. But...we were brought here against our will BUT we absolutely deserve to be here now. We need leaders and "idea makers". We need real concrete change. I promise to do my part. You? ・・・ A cartoon by Victor Varnado. #NewYorkerCartoons 🔁@newyorkercartoons

Defund the police “The change in direction is monumental, but the size of the proposed cuts is not, activists have said. In LA, Black Lives Matter has been pushing for a “people’s budget” that allocates just 5.7% of the general fund to law enforcement, instead of the 51% of the mayor’s plan. More broadly, longstanding abolitionist groups, such as Critical Resistance and MPD 150, argue that the cities should not be looking for minor savings and cuts, but should be fundamentally reducing the scale and size of the police force and dismantle the traditional law enforcement system. That can start with finding “non-police solutions to the problems poor people face”, such as counselors responding to mental health calls and addiction experts responding to drug abuse.” This has been a long week, and by Friday I get exhausted. But we still at it, still working, still making our voices heard. Defund the police. #blacklivesmatter #defundthepolice

The photos of officers kneeling and marching and hugging are nice. The video of officers giving good speeches and becoming emotional are moving. BUT. Friends, we are not going to hug our way to justice. This fight is not about police being nicer. This fight is about systemic racism, injustice, accountability. The cute pictures won’t do. *Policy change. *Defunding. *Abolition *Prosecution These are examples of the deep changes that are being called for right now. This is what it looks like to fight for Black lives in this moment. If you don’t want this to happen again, we are going to need more than hugs. *PS: when you do see the “nice” officers; don’t ask for hugs, ask for courage. Courage to change a system that hurts Black people.

@kthpupp [image: tweet by @kthpupp that reads: “Whether you like it or not, this year will be written in history, your children will be educated of these events. They are gonna ask you what you did, wouldn’t it be embarrassing to say to your own children that you did nothing because you were uncomfortable.”] #BlackLivesMatter #GeorgeFloyd #BreonnaTaylor #AhmaudArbery